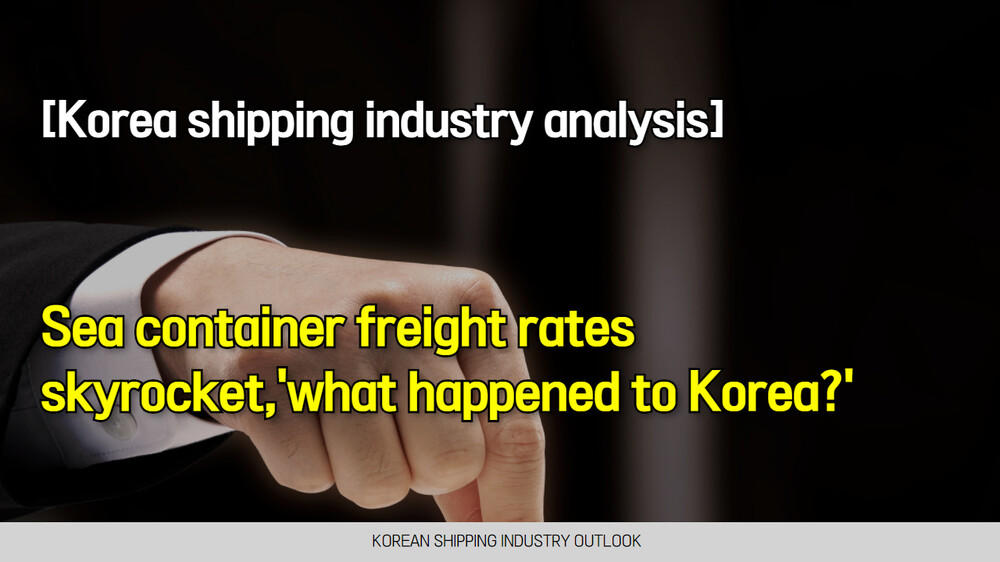 ●Shipping fares for US routes soar

●Stabilization of freight rates by adjusting demand for shipping companies

◆Kim Dongmin (Kim): Hello, this is Logibridge that creates distribution logistics mobility content. We will start broadcasting on October 6. Reporter Park Je-jun, nice to meet you.

◆Kim: Today, we will take a moment to analyze the factors of the increase in sea fares following the increase in air fares last time. These days, container freight rates are soaring. I think the expression of shaking is appropriate. There is a “Shanghai Container Fare Index (SCFI),” which indexes and announces fare information for major container ship routes departing from Shanghai, China. The index has been on the rise for 10 consecutive weeks, hitting 1421 points as of September 25, hitting another high this year. In particular, sea fares in the Americas have increased significantly. As of September 25, fares from Shanghai to Xi'an and Dongan in the US were $4856 and $4625 per 40ft container (FEU). Compared to similar periods and fares in recent years, it is relatively stable at 1589 USD 3124 USD on September 23, 2011, 1291 USD, 2318 USD in 2015, 1414 USD 1991 USD in 2017, and 1328 USD 2346 USD in September 2019. I've been showing you. This year, fares have suddenly started to skyrocket. In addition, sea fares from Shanghai to Santos in Brazil have soared to $3942 as of September 25. On August 21, it was a whopping 188% increase from $1367 a month ago.

◇Park: Has maritime fares started to soar due to the Corona 19 pandemic? According to Clarkson, an analysis agency for shipbuilding and shipping in the UK, it is doubtful that the decline in container volume this year will decrease by 4.4%, which is more severe than during the 2008 financial crisis.

◆Kim: Right. In fact, according to the Ministry of Maritime Affairs and Fisheries, as of August this year, the amount of imports and exports handled by domestic ports was totaled at 18.1 million tons, down 19.7% from the same period last year. As a rule of thumb, when the volume of cargo decreases, the freight rate tends to go down, but now, the freight rate rises. However, it seems difficult to determine the cause as a single factor. The Korea International Trade Association said that the number of ships operated by shipping companies was reduced due to the global trade slowdown due to Corona 19 in the first half of the year due to the recent surge in sea freight rates. They cited the Chinese trend. According to HMM, the US route recorded a low volume of shipments due to weak exports from China due to the Chinese Lunar New Year holiday and Corona 19 in the first quarter. In response, shipping companies preemptively reduced their fleet, and from April, demand for personal hygiene products and e-commerce-related logistics increased, resulting in a reversal of demand and supply. In particular, it is analyzed that the rate hike continued in the third quarter as the peak season for the US routes. According to C Intelligence, a Danish shipping analysis agency, the volume of temporary cancellation in the first half of this year was 4 million TEU, a three-fold increase from the previous year's average of 120 to 1.5 million TEU. In addition, there were cases in which shipping companies refused to retire charterers (borrowed ships) or gave up contract renewals, which is analyzed to have affected the overall supply decline.

◇Park: Right. However, you said that it is difficult to judge the cause of the rise in freight rates as one factor. What does that mean?

◆Kim: In fact, the shipping industry is a completely competitive market with free entry and exit and low service differentiation among shipping companies. It means the competition is very fierce. Ironically, however, the shipping industry around the world is'Oligopoly', where a small number of large companies monopolize the market in the market economy. The Global Federation of Marine Movements (Alliances) has been reduced and reorganized from four to three, and based on this alliance between shipping companies, it is possible to enjoy economies of scale, such as increasing the scope of services and reducing costs by increasing the size. In particular, Jeon Junsu, a seat professor at Korea Maritime University, appeared on our broadcast last year and analyzed that there is a means to adapt to the demand changes in the Oligopoli system. Reduce ships, increase sailing numbers. Although it is not possible to charge the same freight rates, it has been explained that market stability can be achieved through overall market adjustment.

◇Park: That's a pretty convincing argument. However, I know that from this year, the International Maritime Organization and IMO are strengthening environmental regulations to reduce pollutants such as greenhouse gases, nitrogen oxides, and sulfur oxides emitted from ships. In particular, since this year, the standard of sulfur oxide (SOx) content has been lowered from 3.5% to 0.5%. Are there any disruptions in the supply sector due to the strengthening of environmental regulations?

◆Kim: That's right. The supply side effects of IMO environmental regulations are bound to occur. IMO has announced that it will reduce carbon dioxide emissions by at least 40% compared to 2008 by 2030 in order to reduce greenhouse gas emissions from international shipping. In addition, various regulatory measures are in place and are being implemented with the aim of reducing carbon dioxide emissions of all ships by 50% or more by 2050. In order to respond to IMO environmental regulations right now, shipping companies can install desulfurization equipment (scrubbers) on ships, use alternative fuels such as LNG, LPG, hydrogen, ammonia, or use low-sulfur fuel oil. However, the scrubber requires equipment cost and time, and the supply and demand of low-sulfur fuel oil is difficult. LNG ships are very expensive because they are newly built. So, in the mid- to long-term, as environmental regulations are strengthened, shipbuilding will inevitably decrease. Shipping companies responding to these changes will have opportunities, and companies that cannot respond in a timely manner are expected to lose their competitiveness.

◇Park: So, at the core, due to the Corona 19 pandemic, the phenomenon of supply and demand reversed as shipping companies reduced supply through temporary suspension, and in addition, IMO environmental regulations and Oligoli, which a few companies monopolize the market, were directly indirect. It was an influence.

◆Kim: In addition to that, we believe that a combination of factors such as fluctuations in oil prices and the availability of manufacturing plants in each country may have affected maritime freight rates. Today's broadcast ends with this, and the next broadcast will have experts in the shipping field, and we will arrange a place to listen to a little more detailed talk about this part. Reporter Park Je-jun has a hard time. Thank you.