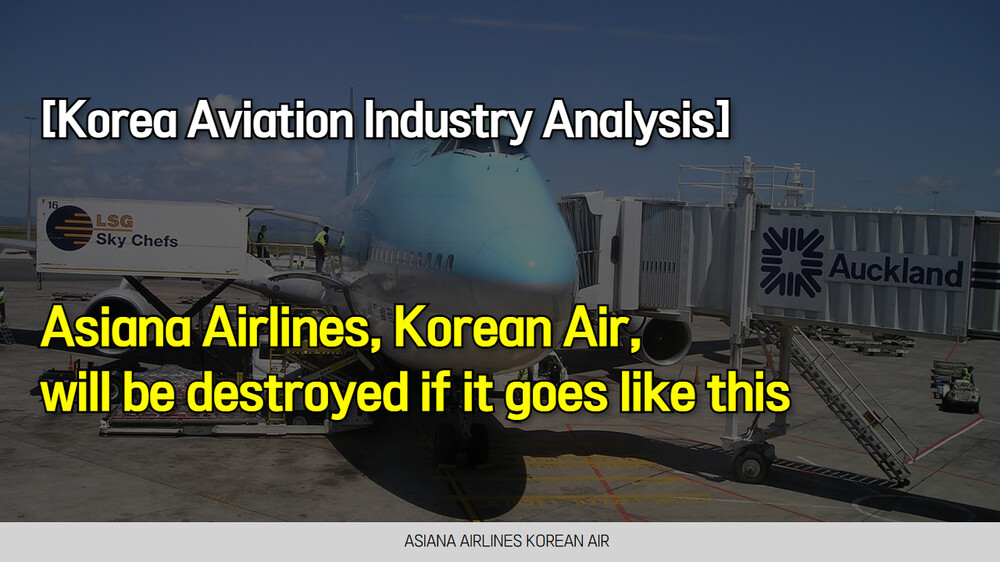 [Analysis of Korean Aviation Industry] Asiana Airlines, Korean Air, will be destroyed if it goes like this

●Korean Air's passenger plane was converted and introduced as a freighter.

◆Kim: Yes, I often come across stories that shipping and air logistics costs have increased due to Corona. So, we planned a section to analyze the reasons for the actual increase in sea and air costs.

According to an official who operates an international logistics brokerage business, that is, a forwarding company that acts as an agent for import and export logistics, the freight rate from Korea to Mexico as of August this year increased from 1300 USD to 4600 USD in September.

It is said that sea and air fares are frequently exploding due to similar cases occurring in major routes around the world.

Moreover, it is said that there are a lot of people who suffer double troubles because the inland transportation costs have also increased due to the introduction of the freight vehicle safety fare system, and sea and air fares have also exploded.

The reason for the rise in sea and air fares, as it is congested in a short period of time, is because shipping companies and airlines have reduced supply due to the corona pandemic.

In proportion to the decline in demand, the amount of supply further decreased, resulting in an increase in freight rates.

So, we would like to take a closer look at the market changes from both shipping and aviation perspectives through a total of two broadcasts.

As a first step, we analyzed sales, debt, supply, and transportation performance in detail through the financial statements of Korean Air and Asiana Airlines, two major airlines in Korea.

◇Park: Yes. As you can see on the screen, we created a graph that briefly compares the two companies. Korean Air was founded in 1962, with Hanjin Kal as the largest shareholder.

◆Kim: Asiana Airlines was established in 1988, and Kumho Industries is currently the largest shareholder. As of the first half of this year, current assets were KRW 1,355.1 trillion, sales were KRW 2.18 trillion, and operating losses were KRW 2685 billion. The debt-to-equity ratio rose to 2291%.

◇Park: As of the first half of this year from January to June, if we look a little closer at the financial statements of the two companies, both companies could not escape sluggishness.

◆Kim: For comparison, we have compiled only the first half data from 2017 to 2020. In the first half of this year, sales from both companies, which showed an annual increase, decreased by 35% and 37%, respectively.

◆Kim: However, both companies are recording huge net losses every year. To view simply as a corona-related problem, the amount of loss that increases significantly every year seems to be a chronic management problem.

Asiana Airlines has a high proportion of large aircraft, including A380s, and more than half of them as operating leases, which is adversely affected by rising exchange rates and oil prices.

In particular, since it is not a problem that can be improved in a short period of time in the case of aircraft lease, it is analyzed that the difficulties of Asiana Airlines are further aggravated by the corona pandemic.

◇Park: Yes. If you look at the debt-to-equity ratio, which increases every year, it is expected that Korean Air and Asiana Airlines' credit rating downside pressure will also increase.

◆Kim: I see. From now on, let's take a closer look at how the proportion of sales by business division of the two companies is changing.

◇Park: As you can see, the proportion of sales of both Asiana Airlines and Korean Air in the first half of this year increased significantly in the air freight division.

◆Kim: The decrease in passenger transportation has a significant impact on fares. In particular, at the lower part of the fuselage, which is the “belly,” of an airliner, there is a “belly cargo cargo compartment” that can load cargo.

As airliners around the world stop operating due to the coronavirus, air freight rates are also rising rapidly in a short period of time.

As you can see in the graph, average freight rates for international flights in the first half of this year increased 91.8% for Korean Air and 58% for Asiana Airlines compared to last year.

As international passenger traffic decreases, air cargo transportation through'Veli Cargo' is hitting a direct hit, and supply is sharply falling against demand, leading to high freight rates. In particular, Korean Air sensed such a change in the flow and maintained the cargo supply at a level similar to the same period last year despite the decrease in passenger transport, further improving cargo transportation performance in the first half of this year.

In recent years, it has been approved for cargo modification of passenger aircraft and is aggressively expanding its air cargo business.

On the other hand, compared to Korean Air, Asiana Airlines was slow to respond to market changes, and cargo transportation performance decreased slightly compared to the same period last year.

However, after the acquisition of HDC Hyundai Development Company was canceled, the company announced plans to expand the cargo business through remodeling of passenger aircraft to improve performance.

◇Park: But what's interesting is that when looking at the passenger category, the average fares for domestic flights have decreased compared to 2019, while international flights have increased.

Domestic flights are analyzed to be due to the bleeding competition of low-cost airlines (LCC). Thanks to that, in the case of domestic flights, there is little change in the air freight rate.

Therefore, it is expected that the profitability of domestic airliners will worsen further in the future due to fierce competition due to oversupply compared to demand.

◆Kim: I see. So, in summary, domestic flights were structurally oversupplied, and despite the corona crisis, the fare fluctuations in passengers and cargo were relatively less.

◇Park: That would be the case.

◆Kim: Yes, reporter Park Je-jun, you had a lot of trouble today. In the next broadcast, we will talk about supply and demand in the shipping sector. You have a hard time.

◇Park: You have a hard time.