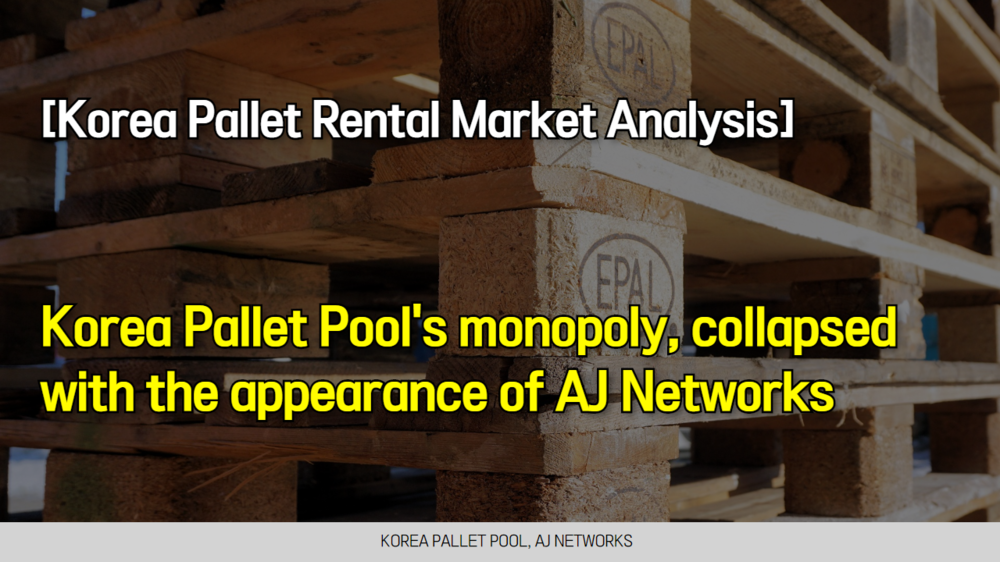 ● Korea Pallet Pool 100% monopoly in the past market

●Analysis of sales and operating profit of two companies

◆Kim : Today, we are going to talk about the pallet rental market, which is an essential part of the logistics business, which means a frame or frame for storing cargo. In fact, many people call it a pallet, but according to the examples of foreign words,'pallet' is the correct pronunciation. Park, Did you know that the Korean pallet rental market has been monopolized by a company called Korea Pallet Pool?

◇Park : I didn't know. I know that pallets are used in various industries, but it is a new fact that this market was a monopoly.

◆Kim : Yes, but now it's not a monopoly. In December 2007, AJ Networks (formerly Aju Rental) entered the pallet rental business, and now the two companies are building a competitive system. 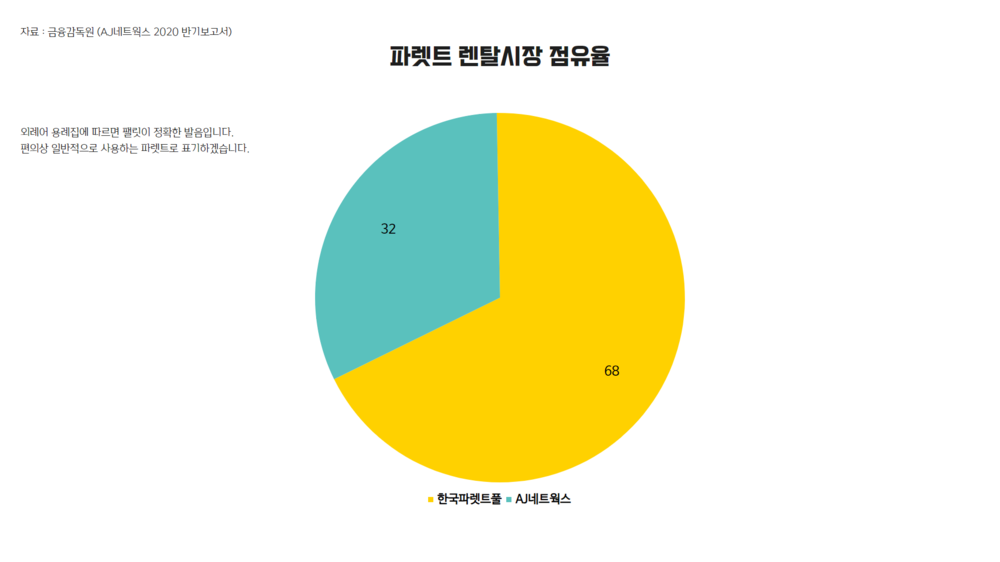 ◇Park : But can't anyone do the rental business? I don't know why the two companies are dividing the market.

◆Kim : The entry barrier is high in the pallet rental business, because network-based large-scale asset input is required.

◇Park : Then, aren't the two companies actually dominating the market?

◇Park: But from the standpoint of the Korean Pallet Pool, I think you would have been reluctant to see a new business operator appear in the market that used to dominate alone. 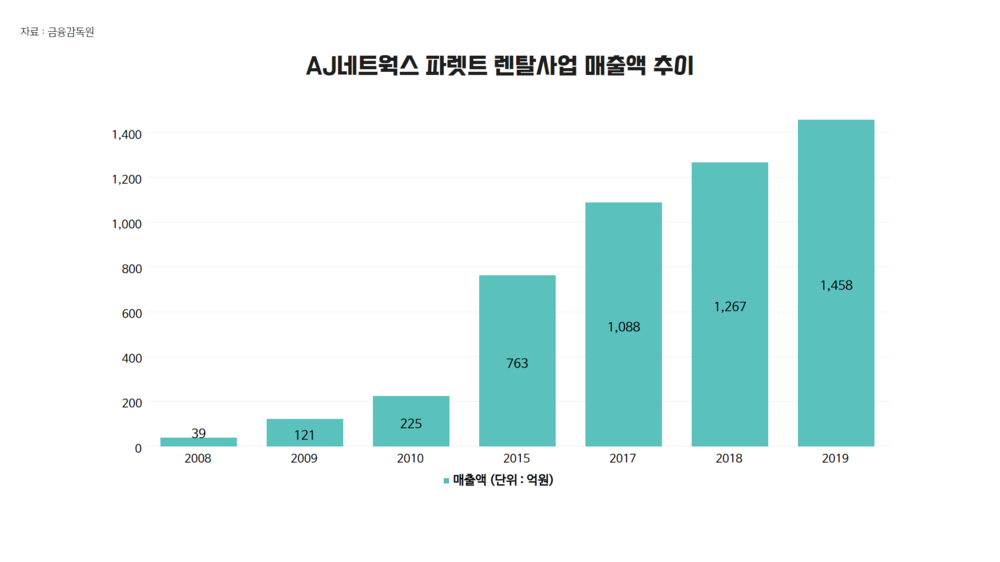 ◆Kim : I have a guess that seems to be the case. The 2008 AJ Networks quarterly report reveals that AJ Networks can easily enter the pallet rental market because there are few participants.

The most recent data, sales of the pallet rental division in the first half of this year were KRW 73.9 billion, a whopping 37.2% of sales, and operating profit is showing stable growth of KRW 15.1 billion. Given this growth rate, you may think that Korea Pallet Pool is expanding the scale of the logistics rental market together, but I think it will not be very pleasant to remember the old memories of dominating the market alone. Considering the fact that AJ Networks' pallet rental division in 2019 was 145.8 billion won, the difference in market share between the two companies is quite large.

However, it should be noted that the market share between the two companies is narrowing over time. As of 2014, Korea Pallet Pool sales were about 255 billion won, and AJ Networks was 63 billion won, dividing the market by 80% and 20%, respectively.

As previously explained, AJ Networks is rapidly pursuing with 68% and 32% in the first half of this year.

◇Park: Does the fact that the market share is gradually narrowing means that the growth of the Korean pallet pool is relatively stagnating compared to AJ Networks?

◆Kim: It is not clear that growth has stagnated, but looking at the growth rate of sales in 2019 compared to 2015, Korea Pallet Pool increased 38.9% and AJ Networks increased 90.9%.

In fact, from the perspective of customers who rent and use pallets, it would be better to have several alternatives than a single company to dominate the market, right?

In that respect, the growth of AJ Networks seems to have many positive aspects for the logistics industry.

Imagine if Korea Pallet Pool is dominating this market so far. From the perspective of customers, even if a problem occurs, there is no alternative, so I think it may have caused a lot of inconvenience. 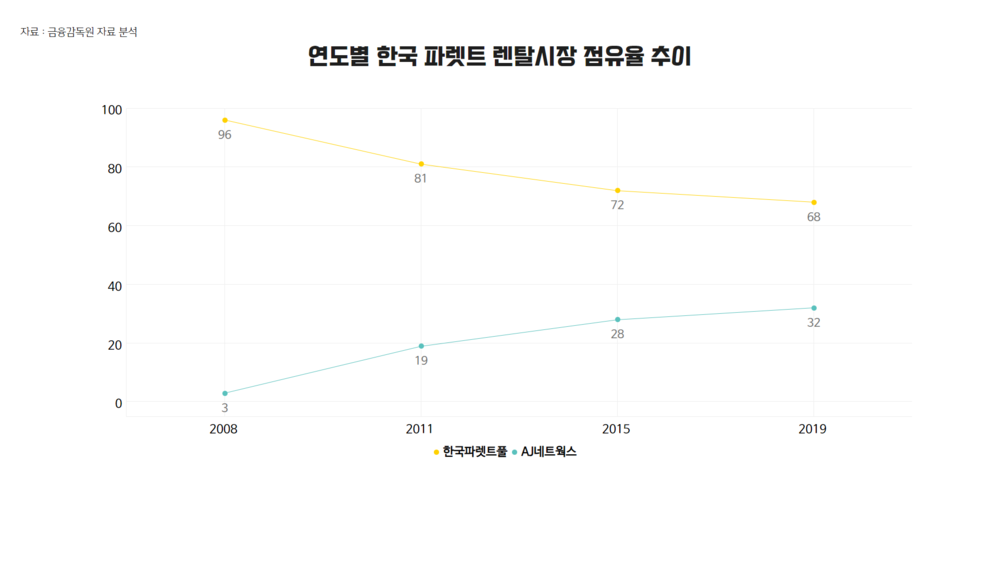 ◇Park: Right. It's a different matter than a single company monopolizing the market and still having an alternative. From the perspective of the Korean Pallet Pool, it means that there have been competitors after AJ Networks entered the market, right?

Therefore, it is speculated that there was also a rental price competition. Are there any changes in operating profit or net profit?

◇Park: It is difficult to judge with just one indicator right now, but the fact that there are competitors in the market seems to have many positive aspects from the perspective of customers and users.

◆Kim: Yes. Today, we looked at the general flow of the pallet rental market. In the next 2nd part, we will prepare the data in a little more detail, focusing on the comparison/analysis of the two companies of Korea Pallet Pool and AJ Networks.

It's a bit unfortunate, but today's broadcast ends with this, and we'll see you again in the next broadcast. Thank you.