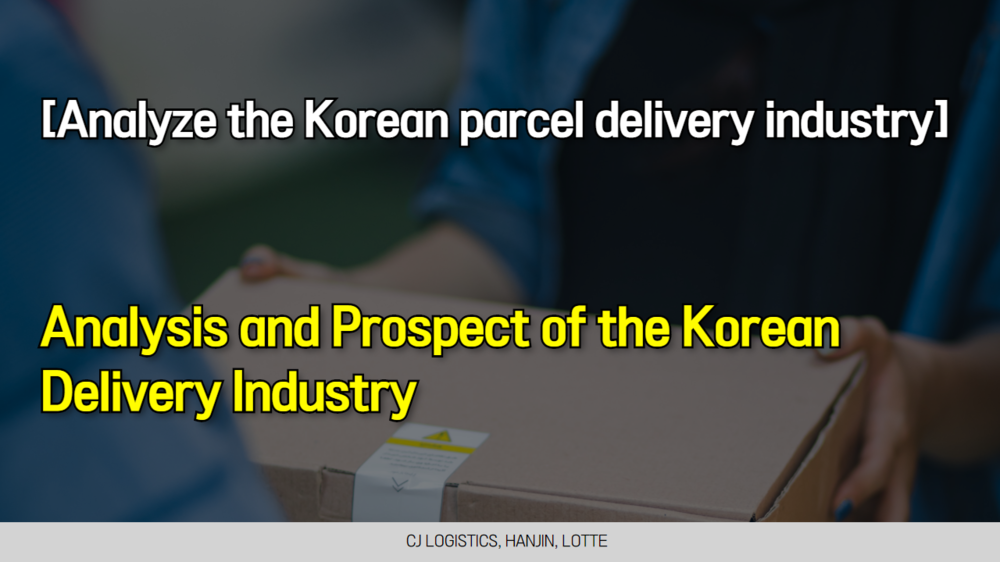 Analysis and Prospect of the Korean Delivery Industry

◆Kim: Prof. Park, do you often use courier services?

◆Kim: I see. I also use a lot of courier services. It is said that last year, the number of parcels per person in Korea reached about 54 times a year.

◇Park: Yearly? I thought there would be more, but less than I thought.

◆Kim: Right? But in 2010, it was 25 episodes, so it almost doubled. But this number is growing rapidly every year. Is Pro Park Park a company that comes to mind when it comes to courier services?

◇Park: I think I have seen CJ Logistics often. If I usually order a courier, CJ Logistics driver often sees me.

◆Kim: I see. I see a lot of CJ Logistics vehicles and drivers on the road. I think it's gotten more and more in recent years.

◇Park: After the Corona, I saw the news that delivery drivers are having a lot of hardship due to the increase in the delivery volume, but these days, it seems that there are more.

◆Kim: That's right. So, today, we are going to talk about the name and cancer of the top three companies in the parcel delivery industry that improves the quality of life of the people even in the face of the coronavirus outbreak.

◇Park: All right. I think it will be interesting.

◆Kim: Yes, then, in earnest, we gathered data on how the delivery business of major delivery companies is growing by year. CJ Logistics is overwhelmingly ranked first, with sales rapidly increasing from 1.9 trillion won in 2017 to 2.5 trillion won last year. Hanjin and Lotte Express also grew from 600 billion units in 2017 to 800 billion KRW last year. The post office and Rosen are also showing steady sales growth.

◇Park: By the way, sales seem to be slowing down quickly, but is there a lot of profit? According to the news, the post office's cumulative deficit reaches 1 trillion.

◇Park: CJ Logistics has overwhelmingly high sales and operating profit. Are you overwhelming number one?

◇Park: It's overwhelming. But Coupang also ships rockets these days, but there is no Coupang?

◆Kim: Because Coupang delivers the goods they purchased directly to its own distribution center, it is difficult to see it as a courier, so it is excluded from statistics. The market estimates it is about 13% in terms of volume, so it is similar to Hanjin Lotte.

◇Park: We covered it in the last broadcast, but hasn't online orders increased a lot this year? CJ Logistics, Hanjin, and Lotte Global Logistics are not a simple courier company, but as a comprehensive logistics company, they are engaged in various logistics businesses including inland transportation, unloading and global transportation. Then, with the increase in the delivery volume this year, the proportion of the delivery business must have increased.

◆Kim: That's right. Now, we have organized the data in a nice way. From 2018 to 2020, we summarized the share of the parcel service business in total sales by each company.

◇Park: It really is. Looking at the graph of CJ Logistics, the proportion of the parcel service business in total sales increased from 25% in 2018 to 29% last year. By the way, the proportion of parcel delivery sales increased, but the overall sales increase or decrease rate was 30% in 2018, but this time it has decreased too much to the 4% level. We presented the goal of a global comprehensive logistics company, but I think the dependence on the parcel delivery business is increasing.

◆Kim: That's right. CJ Logistics achieved 109% of its parcel delivery production performance and utilization rate in the first half of this year. However, the business division called third-party logistics or contract logistics reached 72%, short of its business target.

◇Park: Oh right. However, looking at the data, Hanjin's parcel sales accounted for close to 45%. Recently, when I saw Hanjin's financial statements, it was said that we will focus on delivery and logistics, our core business, and restructuring businesses that are poorly profitable and difficult to secure competitiveness through sale or business suspension. Seeing the increasing proportion of the parcel business, it really seems like that.

◆Kim: Yes, I think so too. Total sales are 1.6 trillion won, of which 480 billion won is parcel delivery. The target for the parcel delivery business this year was 960 billion won, an increase of 122% compared to 2019. In fact, this goal was achieved in the first half of this year. It really seems like a strategy to go all-in to the delivery business. We will talk in detail later, but the expected future investment is the highest.

◇Park: How has Lotte changed since the merger of Lotte Logistics and Lotte Global Logistics?

◆Kim: There have been many changes. Since there is no need to have two logistics companies within the Lotte Group, we merged with the cause of the unification of the efficient operation and management system of human, physical and network.

However, as of 2018 before the merger, when looking at the transaction status between related parties of Lotte Logistics, the proportion of internal transactions reached 91.6%. However, as it was integrated with Lotte Global Logistics sales, the proportion of transactions with special affiliates such as Lotte Holdings and Lotte affiliates decreased to 31% in the first half of this year. In this process, since Lotte Logistics had no share of parcel sales, it was analyzed that the share of parcel delivery business also decreased.

◇Park: Yes, it is. There was such a process. But if you look at the data now, in fact, the three companies in Korea's parcel delivery industry have considerable influence. In terms of market share, I think they are in their 70s to 80s. Isn't it actually monopoly?

However, based on the collection rate in the first half of this year, CJ Logistics' share exceeded 50%. However, since Hanjin and Lotte do not disclose the collection rate, As a result of calculating market share based on sales, CJ Logistics is 43%, Hanjin 13%, and Lotte 12%. The combined share is 68. So, if we estimate the market share of Hanjin and Lotte at 13% and 12%, we get about 76%. It's actually a monopoly market.

◇Park: Oh, I didn't know that. By the way, the parcel delivery industry is an infrastructure-oriented industry, labor-intensive, and in recent years, it is becoming a high-tech industry, right? So, I think it will be difficult for new businesses to jump in and dominate the market. Then, the influence of the three courier companies will increase in the future. What will happen in the future?

◆Kim: Yes, I also sympathize with that part. So, we investigated how the three courier companies will invest and expand their infrastructure in the future. Yes, CJ Logistics announced that it would invest 460 billion won, Hanjin 570 billion won, and Lotte 560 billion won each.

◇Park: Right. That's a fair amount? This aggressive investment means that in the future, the three companies may gain more dominance.

◇Park: The market share already exceeds 50%, but if you invest this much, it seems to be an aggressive strategy to increase the capacity to handle the volume in the future.

◆Kim: That's right. However, Hanjin has the largest amount of investment. As you can see in the data now, there are three additional investments planned in the future, including five in progress, especially because a press release was released saying that Daejeon would spend 330 billion won to build a mega hub terminal. The willingness to expand the courier business seems quite high.

◇Park: It's scary. Now, I am worried that there may be no alternatives to courier services other than CJ Logistics and Hanjin in Korea.

◆Kim: Lotte cannot be ignored either. Lotte is making more aggressive investments in the digital transformation and special cargo sectors. All three companies are challenging. These days, urban logistics companies are emerging on the basis of two-wheeled vehicles, but at the time when the annual parcel delivery volume exceeds 3 billion, it is unlikely that the parcel delivery industry will easily increase its share in the market as a latecomer, no matter how innovative technology and capital it has.

◆Kim: Thank you for listening again today. Thank you.